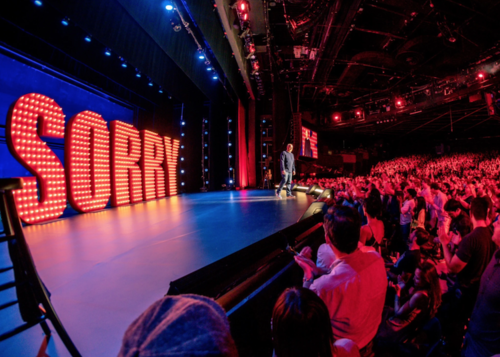 Comedian Louis C.K., who got banished for years to purgatory for sexual misconduct, has launched a 24-city comeback tour that includes three nights at the Royal Oak Music Theatre Nov. 28-30.

Is a true comeback in the cards? This tour will probably help answer that question.

The comic sold out New York City's Hulu Theater at MSG and performed in front of a sign that read 'sorry' but didn't appear too apologetic when joking about touchy subjects such as 9/11, pedophiles and the obsession with the Covid death toll.

His award-winning FX series, "Louie," was cancelled and he got the pariah treatment in the entertainment industry.

“These stories are true," he said when the accusations surfaced. "At the time, I said to myself that what I did was OK because I never showed a woman my dick without asking first, which is also true.”

Since 2018, he's done some comedy. But so far he's failed to regain his previous stardom.

In his 2020 comedy special “Sincerely, Louis C.K.,” C.K. joked about his misconduct: “How was your last couple of years? How was 2018 and 2019 for you guys? Anybody else get in global amounts of trouble?” he asks his audience. “I learned a lot. I learned how to eat alone in a restaurant with people giving me the finger from across the room.”

Tickets for the Royal Oak performances are $38-$78.